Born in 1956. An alumnus of the Adam Mickiewicz University Faculty of Law and Administration in Poznań and of a post-graduate program of the Warsaw School of Economics.

In the years 1993–1996 Director of the Department for the Reform of Public Administration at the Prime Minister's Office in Warsaw. From 1996 to 1998 Deputy Voivod of Poznań. A Member of the Board of the Wielkopolska Region during the first term of office and then between 2001 and 2003 the First Deputy Voivod of Wielkopolska.

As Deputy Marshal, he is in charge of expanding the regional transportation infrastructure and of processes related to enterprise support and employment enhancing, e.g. through monitoring the situation on the labour market and attracting foreign investors. As Deputy Marshal he supervises the following departments of the Marshal Office of the Wielkopolska Region: Department of Transport, Department of Infrastructure, Department for the Implementation of the European Social Fund, the Chancellery of the Regional Assembly and Investor Supervision Office. He is also responsible for the operation of the Wielkopolska Region for Spatial Planning and the Wielkopolska Region Labour Office in Poznań.

Internationally, on behalf of the Union of Regions of the Republic of Poland, Deputy Marshal Wojciech Jankowiak represents our region in the Chamber of Regions, being the Chairman of the Polish Delegation to the Congress of Local and Regional Authorities of the Council of Europe (CLRAE) in Strasbourg. He is moreover a member of the Peri-Urban Regions Platform Europe PURPLE, and since 2014 a Member of the Board – Vice Chairman of the Platform. 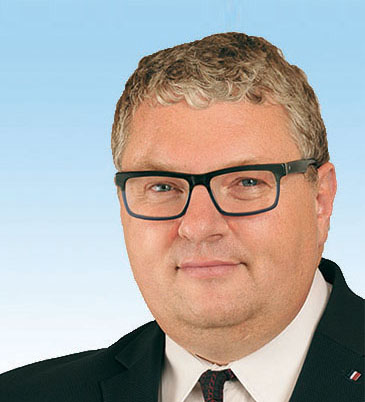 He was born on September 9, 1973 in Kalisz. A graduate of the Mechanical Technical School in Lisków, he graduated from the Adam Mickiewicz University in Poznan, specialized in Local Government Administration and European Administration. He also graduated from the 18th School for Civic Society Leaders, a prestigious school founded and run by Professor Zbigniew Pełczyński from Oxford. In 2021, he successfully graduated from the international Executive Master of Business Administration (MBA) postgraduate studies at the Central Management School in Warsaw - a field of study addressed to high-level management. He also completed a course for pedagogical qualifications.

In the years 1994-2010 he was a councilor, in the years 1994-1998 a member of the Commune Council, and since 1998 the Chairman of the Ceków-Kolonia Commune Council for 12 years. With his social involvement, he caused, among others, implementation of many investments in the commune, for example, a construction of the Municipal Waste Disposal Plant "Orli Staw", a sewage treatment plant, reconstruction of the sewage and water supply network in the entire commune. He is an initiator of the construction of numerous commune and poviat roads, including the Kalisz-Turek regional road. He participated in the conclusion of a partnership agreement with the German commune of Amtsberg in the field of education, culture and sport.

From 2006 to 2010 he was the press spokesman of the State Higher Vocational School named after President Stanisław Wojciechowski in Kalisz and he was an assistant to a Member of the European Parliament, Andrzej Grzyb, in the years 2009-2010.

He was professionally associated with journalism for many years. He worked as a radio and television journalist in Kalisz and for editorial offices covering the entire country, including RMF FM and "Teleexpress". He actively cooperated with Wielkopolska newspapers and regional magazines. He was awarded five times by the National Labor Inspectorate and the Chief Labor Inspector with the medal "For merits for labor protection".

He is involved in the activities of the Self-government of the Wielkopolska Region. He constantly promotes achievements of the Wielkopolska agricultural sector and farmers. He is a continuator of the "Wielkopolska Farmer of the Year" competition, one of the most recognized and prestigious awards granted by the Self-government of the Wielkopolska Region. He actively works for the integration and development of local communities. He supports initiatives carried out by Local Action Groups, Rural Housewives' Associations operating in our region. The following programs are among the most important initiatives carried out under the leadership of Deputy Marshal Krzysztof Grabowski: "Wielkopolska Renewal of Rural Areas", "Program aimed at improving phytosanitary conditions of bee colonies", "Rain water" and "Program aimed at reducing food waste and losses in Wielkopolska for the years 2021-2025", for which the regional self-government allocates multi-million financial resources every year. He strongly promotes the cultural and culinary heritage of Wielkopolska, thus supporting Wielkopolska producers of regional and traditional food. He also works to build a variety of infrastructure, including the one with the EU funds under the Rural Development Program and the Wielkopolska Regional Operational Program, which enable the modernization and construction of roads, water and sewage networks, hospitals and the modernization of educational and cultural facilities, improving comfort and quality of life for the people who reside in the Wielkopolska Region.